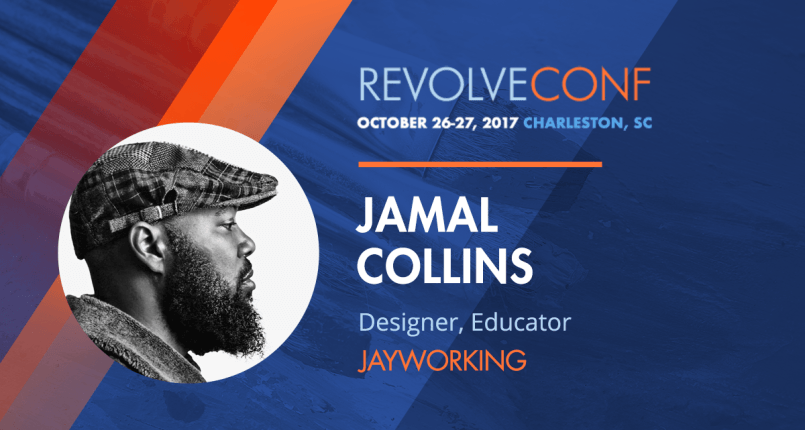 Where Design and Creativity meets Marketing and Strategy

I can’t wait to be apart of this conference coming next month. This is just another platform to spread and bring awareness to the underlining issues of the inner city and the need for change. Thanks again for the guys at Revolve Conference for the invite to talk about Design and Social Change. Below is a cool spotlight of me featured on thier blog.

The life and career of Jamal Collins is a testament to the importance and impact of having the encouragement and guidance of one who has gone before.  It was a lack of these influences in high school, college and his early career that motivates Jamal to spend his life working primarily with children ages 9 through 19.

In 2014, after spending 17 years as a graphic designer in a corporate setting, Jamal discovered his life’s purpose while volunteering as an art instructor for the Boys and Girls Clubs of Cleveland (BGCC).  Jamal recognized his calling to redirect and focus the energies of ‘at risk’ youth using what he knew – graphic design.  He next stepped into the role of Independent Consultant, created the After School Graphic Design Program at BGCC, and has since been making a positive difference in the lives of Cleveland’s Creative Kids.  Jamal indicates that he purposely reached out to kids living in single-parent homes; in an environment of drug/alcohol abuse, poverty, and education disparity. Echoing the adage, ‘It takes a village’ Jamal reiterates that children in our society need more than a mother and father; they need a community.  Jamal takes the next logical step and declares himself to be ‘part of that community.’

Jamal is all about unlocking and nurturing creativity, through what he knows about Design, and the design community at large.  He uses the structure of graphic design as a means of connecting with, and guiding his students to alternative ideas for their future.  It’s a grassroots effort that requires him to traverse East Cleveland, and 6 locations in Cleveland several times a week to teach design technology such as Adobe Creative Cloud, photography, and video editing using iMacs. However, it doesn’t end there – Jamal’s creative kids also receive training in marketing, branding, social awareness/responsibility, and communication skills.  Creative Kids are consistently being groomed to reach their full potential as productive, responsible and caring citizens. To this end, they are taught that higher education is not necessarily a precursor to entrepreneurship, and they are trained to use both technical and soft skills to change their lives.

Jamal Collins aka Jayworking, considers himself an ordinary guy that cares about his family and community. He is happiest when he can add value by exposing his charges to alternate points of view, and give feedback geared toward improving the shared life experience. Jamal is systematically reprogramming the self-perception of the kids in his sphere of influence. He acknowledges their flaws, but focuses on, and gets his students involved in embracing a positive self-fulfilling prophecy.  Jamaldoes this even as he and his wife are raising and homeschooling their 5 children. Children he affectionately refers to as his Tribe of Future Designers.

‘Education is the most powerful weapon which you can use to change the world.’